It was the tale of two runs this week – one 10 miler that didn’t feel so great and a second one that felt awesome and has me fired up for the Grand Rapids Marathon next week.  The good news is – the good one was the most recent one.

Run number two was also the crazy frog morning – 26 of them hanging around in the road, waiting to get mowed down by a car.  The frog rapture? 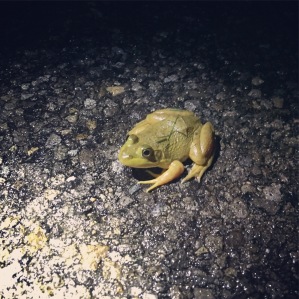 The second run also reminded me why it’s so awesome to run.  It was a cloudy / foggy morning, but about 7 miles in, there was a break in the clouds and a little sliver of the moon and venus were hanging out over the field.  It was one of those views where you stop a minute and appreciate the beauty in this world.

No running over the weekend.  We took a trip to Ohio to visit the grandparents and did get a short trip in to the Columbus Zoo.  My exercise consisted of lugging the kids around between animals.  It’s a nice zoo; I recommend it if you’re in the area.  Polar bears / elephants / lions / rhinos / gorillas (17 of them!!) … all stuff we can’t see here at our local zoo. 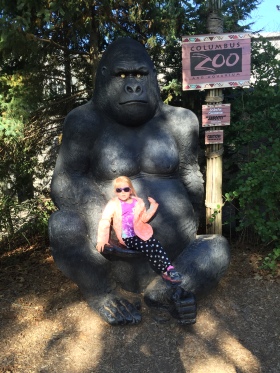 Six more days until the Grand Rapids Marathon.  At the moment, it looks like perfect weather 20% chance of rain and upper 30s at the start.  I have a couple of short 5 milers planned for the beginning of the week and then it’s time to relax for Sunday.

I’ll probably have a couple of practice beers this week so I’m ready for the beer tent post race as well.