Seriously!?  You just announced to the world that you’re running two hundred mile races, and blogging about it, and you’re hurt already!?

What can I say?  Shit happens.

My awesome Grand Rapids Marathon came at a cost – I’m injured.  I don’t recall anything specific happening during the race, but my left leg did bother me during the long out and back section.  As best as I can figure, I think it was due to me running on the right side of the road (all runners were running ‘with traffic’ as the road was closed).  Typically I run against traffic so I can see what’s coming.  Therefore the crown of the road typically has my left leg lower than my right.  During much of the race on Sunday, it was the opposite.

Perhaps it was something else, but that’s the best I could come up with.

I noticed my left ankle is stiff with pain on the inside.  I don’t have my full range of motion with it either.  I ran on it this morning, and it felt better once I was going, but that made it worse later in the day.  According to Dr. Google, it looks like it could be some tendonitis – which leads to stretching, and this … (please ignore the pink towel – I’m the only male that lives here) 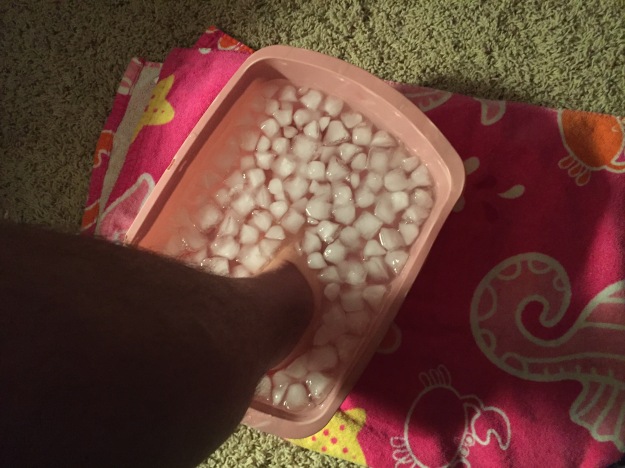 Holy crap that was cold!!!!

So I’ll on the ice / ibuprofen / tiger balm treatment for a few days.  It’s a bummer too because I’ll be out-of-town this weekend, for a long weekend.  Running is always a great way to see somewhere new.  Oh what the hell, perhaps I’ll take my running shoes anyway – just in case …

1 thought on “Time for a Trip to the DL”