Definitely not my favorite week of running.  This was supposed to be the week that I begin rolling with my training for the Yankee Springs Winter Challenge 50k.  Instead – I was sucked further into ‘The Hole.‘

Monday started off well enough with an easy 6 miler to test the ankle.  The early morning brought lots of stars and a beautiful fat moon setting into the early morning sky.  My ankle held up ok, but was still a little sore through the day.

I couldn’t get out of bed to run.  For anything.  I’d been fully sucked into the hole.

With some prodding (begging?) from my wife I made it out for a 6 miler on Saturday, and it was beautiful.  Cold, pouring rain, beautiful.  One positive out of the run, I ran a mile in under 8 minutes.  I haven’t done that in a while, but 45 degrees and pouring rain can make one move a little faster.

One of my employees asked about my weekend today – I told him I ran.  It rained.  And I was wearing a t-shirt and shorts.  So you went right home then?  Nope.  I ran faster.  And it was awesome.  You’re crazy.  Aren’t we all?

Sunday was about as beautiful as a day comes in Michigan – Perfect cloudless sky and about 60 degrees.  I took the family over to Kellogg Forest for a hike 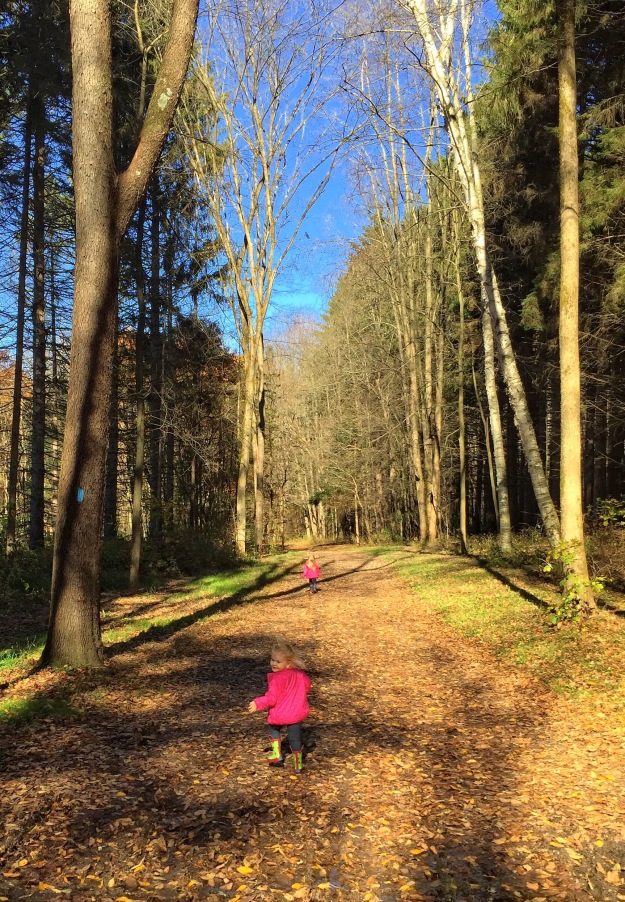 The girls had a great time learning about moss and ferns and petting a little garter snake we found.  My oldest daughter taught us what a beech leaf was.  She’s 4.  My wife and I are a wee bit older.  I Googled it – and she’s right – my wife told me as we rounded another corner.  At least we’re getting our money’s worth at the Nature Center preschool??

After the run, the girls went home for a nap and I was back at Kellogg Forest to run trails.

Sometimes Ma’ Nature stops me in my tracks and all I can say is ‘Whoa!’

The 6 miler took me past some of my favorite areas of Kellogg Forest – including the geocache where I proposed to my wife.  With a ring pop.  Time has changed things.  It was a bit overgrown now, and the pine trees that were about knee-high at the time towered over me.

I also spent some time running along the North Country Trail – the same trail I’m planning to run my first 50 mile race on in August – albeit a section much further North.  It’s cool that it’s so close to home.

That was the week – in a nutshell.

On side note, October was an odd running month.  It was by far my lowest total mileage for the year (barely over 70), but yet I crushed the Grand Rapids Marathon – so I feel great about that.

(By the way – I hear the coyotes raising hell outside at the moment.  I love hearing that.)

Let’s see what November brings.  For now, I’m off to see if I can find the Northern Lights.  They’re supposed to be visible here tonight.