Although the week started out slowly, I finally feel like I’m starting to get back into the swing of things.  After a nice 7 mile run early in the week, I deliberately took a few days of rest to finally kick this nagging chest cold that seems like has been hanging on forever.

That brought me to the weekend, and it was awesome!

Saturday morning started out sleeping in (more rest for the cold) followed by my favorite time of the week – breakfast with my girls.  Eggos all around!  I run to eat worse, vs. eat to run better!

After swim lessons with the oldest, it was off to 7/11 for Slurpees (new tradition I guess, we’ve done it two weeks in a row) before heading out on the first of three runs over the weekend and our last stroller run of the season.  Even though it was a bit chilly, we enjoyed it.  No monsters or alligators chased us on Saturday – just leaves.  And lots of ’em, it was VERY windy. 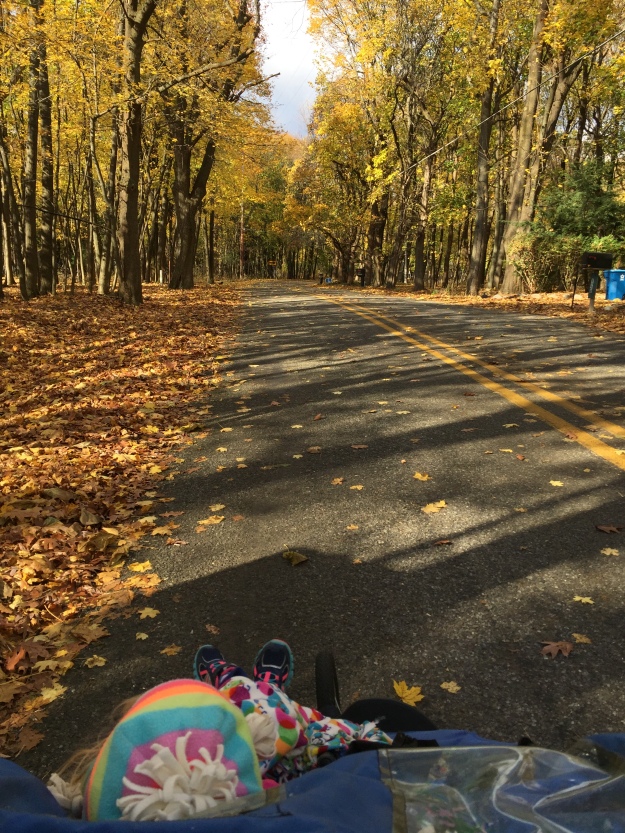 After the stroller 6 miler, I dropped her for a nap and headed out for a quicker second lap.  It felt good to get a little speed in the legs.

My wife and I had a chance to get out, as adults, on Saturday night and enjoyed an awesome meal at Principle Food & Drink.  If you’re ever in Kalamazoo, try it.  It’s awesome – specifically the spicy pork craklin’s and the Korean BBQ wings.  Wow, wonderful indeed!

Hey – I thought this was a running blog, not an eating blog …

Ok… back to running …

That brings me to this morning’s run, and it was AWESOME.  Wow, what a sky full of stars.  My wife told me Saturday night there was supposed to be a meteor shower overnight.  I’m glad I made it up in time to run under the stars.  This was the first time I ran w/o my headlamp.  I had it with me, and turned it on a couple times when there was a car nearby, but most of the time it was off so I could enjoy the stars.  I did see two meteors along the way as well!

I did cut he run short though.  My route took me past the house about half way.  That was a mistake – the coffee was calling my name and I bailed on the last few miles.  In the end, it was for the best.  My girls woke up right after that and it let me make banana bread with them while my wife slept in.

All in all though, 25 miles this week is finally a number I feel decent about again.

As for Western States – it’s time for those who’ve qualified to enter the lotto.  There are a few folks I follow on Twitter or Strava who are throwing their name in the hat.  I wish them all the best!  Two more years and I expect to do the same!