Around Christmas 2012, my brother told me he was running a half marathon the following summer.  I remember him wearing some new blue workout pants and they looked pretty sweet.  I like new gear, but I wasn’t going to buy workout pants without working out.  And I didn’t work out.  I thought he was crazy.  But apparently that conversation planted a seed.

Fast forward a couple of months to February (the absolute nicest month in Michigan – you know, the one where the sun never peeks out of the cloud and there’s usually a foot of snow on the ground) and the seed germinated.  I thought, eh, I’ll run the half marathon too.  After all, they give you a beer at the end of the race.  All I have to do is go out and run 6 miles today.  Then 7 next week.  Then 8, etc.

And that’s when I got pneumonia.

I didn’t run again for about a month, but one week before the race I ran 8 miles.  BAM!  I’m good right?

Mid summer 2013 – race day comes, it was in Columbus – the Capital City half Marathon.  Macklemore had me all jacked up.  We sang the National Anthem.  Everyone was Boston Strong.  And there were pyrotechnics.  I was going to crush this.

Things were great for 8 miles and then BAM.  I hit the wall.  Hard.  I struggled through the next couple of miles and then saw runners ahead finishing.  But I had to turn away from the finish line and run the opposite direction.  That really took the wind out of my sails.  I still had another 3 to go.  But I chugged along and finished.

I walked away from the finish line, feet killing me, finisher’s medal around my neck – towards a beer and a fried bologna sandwich.  I was hooked.

And that’s how this journey began.

That’s me – the one w/o the sweet mustache.  By the way, check out that sweet cat shirt on the dude behind my brother.  I just noticed that – that made my night. 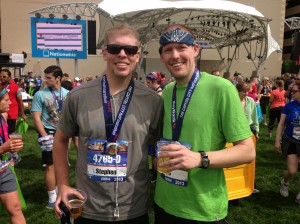